The Movement Of Data: How information travels around the globe

Did you know there are now more than 3 billion Internet users on the planet?

100 million emails a minute are now sent over the web, but how does each one make its way  from its source to its destination intact in a split-second?

To understand the movement of data, we’ve tracked the route of just one email to show you how – following the journey from outbox to inbox and everything in between.

By tracing the path from sender to receiver, our infographic lets you explore what really happens each time you click ‘send’.

Take a look here. And don’t forget to tell us what you think.

In less than a quarter of century, the web has transformed our ability to communicate with one another, to share ideas and exchange knowledge. Thanks to numerous technical updates to the Internet’s vital systems in the years since, huge amounts of data can now being sent vast distances and at breathtaking speeds.

Information moves across the globe in a matter of seconds, through hundreds of data centres, thousands of local exchanges and more than half a million miles of cables. It’s an intricate system of networks and cross-border cooperation that moves more than 640 terabytes of data each minute. It’s also something that, for the most part, gets taken completed for granted.

You’ve got mail… lots and lots of mail 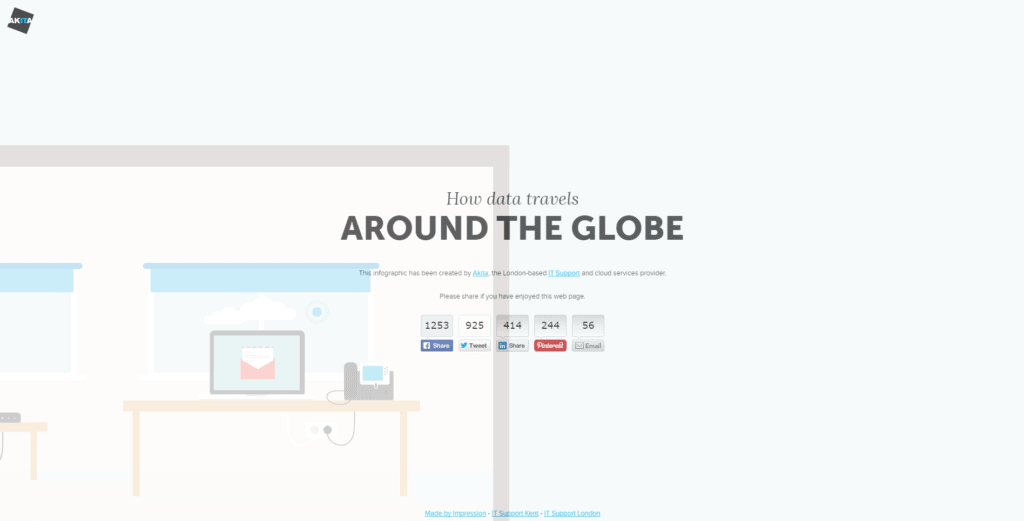 Let our infographic show you how data moves around the world.

More than 3.4 million emails are now sent every single second. Yet the questions of how so many different processes work together to make each data transfer possible or even how the Internet manages to just keep working every hour of every day are rarely considered, let alone answered. Let our infographic answer them for you.

Akita is making improvements to its helpdesk system to make it operate faster for our helpdesk engineers. Following investments in…

Akita’s Datacentres Used In The Fight Against Diseases

At this time, we’re all looking for ways that we can help with the wider effort against COVID-19 while also…

Akita is pleased to announce the launch of our new Customer Portal. Developed in Power Apps Portals and based on…

Read more
We use cookies on our website to give you the most relevant experience by remembering your preferences and repeat visits. By clicking “Accept All”, you consent to the use of ALL the cookies. However, you may visit "Cookie Settings" to provide a controlled consent.
Cookie SettingsAccept All
Manage consent

This website uses cookies to improve your experience while you navigate through the website. Out of these, the cookies that are categorized as necessary are stored on your browser as they are essential for the working of basic functionalities of the website. We also use third-party cookies that help us analyze and understand how you use this website. These cookies will be stored in your browser only with your consent. You also have the option to opt-out of these cookies. But opting out of some of these cookies may affect your browsing experience.
Necessary Always Enabled

Performance cookies are used to understand and analyze the key performance indexes of the website which helps in delivering a better user experience for the visitors.

Analytical cookies are used to understand how visitors interact with the website. These cookies help provide information on metrics the number of visitors, bounce rate, traffic source, etc.

Advertisement cookies are used to provide visitors with relevant ads and marketing campaigns. These cookies track visitors across websites and collect information to provide customized ads.

Other uncategorized cookies are those that are being analyzed and have not been classified into a category as yet.